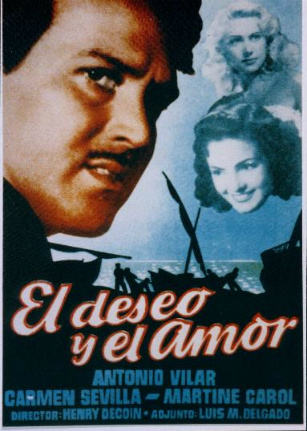 Plaza de Uncibay: One of the first films that used the iconography of Malaga’s Holy Week in a fictional plot was this co-production with France that altered the life of Malaga with the presence of the French diva Martine Carol, the gallant Antonio Vilar and a very young actress and singer Carmen Sevilla. The film crew filmed the passage of the brotherhoods while the protagonists solved their love dramas in the climactic scene of the film. In the stills appears the famous La Reja tavern, also known as Casa Barcenas, where Antonio Vilar drank some local wines. In a report in the local newspaper SUR, the actress Carmen Sevilla confessed that she charged 300,000 pesetas (1,800 euros) at the time for this role.

The Miramar hotel was the great residence of the film filming teams that toured the capital and the province with their cameras in the 1950s and 1960s. In addition to being the headquarters of the production companies and their protagonists, the Miramar hotel provided On numerous occasions, his facilities for the filming themselves, such as in the case of Desire and Love, whose balconies, stairways and gardens housed the love affair of Antonio Vilar and the French film star Martine Carol, which aroused the jealousy of Carmen Sevilla . This historic modernist-style property, located in front of the sea and in the middle of the bay of Malaga, closed at the end of the sixties and was later converted into a Palace of Justice. Currently, it has returned to its original use as a luxury hotel.