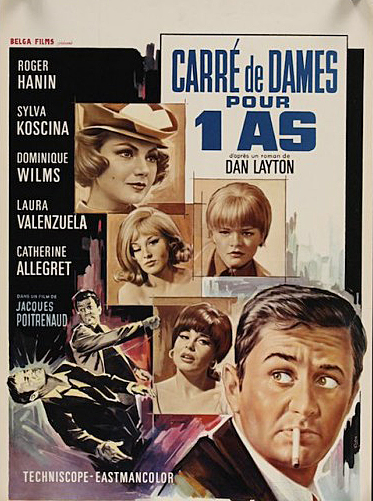 After filming Le tigre se parfume à la dynamite, actor Roger Hanin – the quintessential French 007 – returned to the Costa del Sol with another secret agent character, Dan Layton. A Franco-Italian-Spanish co-production, the fashionable spy movie arrived with a special female role in the prelude of the growing fame of the Bond girls. Italian actress Sylva Koscina, French actress Catherine Allégret, Belgian actress Dominique Wilms and the Spanish actress Laura Valenzuela formed the four queens who put the spy Layton in trouble, while chasing and shooting all the way up to the Parador de Gibralfaro in Malaga, a hotel perched on the hill overlooking Malaga and with unique views of the capital. The terrace of this establishment is a good place to visit for a coffee and then on the way to visit the Gibralfaro Castle, also a film location. The press reports explained that the budget for this license to spy amounted to 38 million pesetas at the time, which today is just 228,000 euros, although at the time it involved ample financing.